Today I watched the remake of Stephen King’s “It” (I really enjoyed it by the way, it is a combo of coming-of-age bittersweetness and nicely done classic horror). Before going into the theater, I spent about 30 minutes standing in the lobby of Williamsburg Cinemas, watching people using the ticket machines.

For a frequent movie goer like me, the ticket machine is straight forward. You go up to the machine, choose movie, choose time, choose your payment method and swipe your card, done! By watching other people do it, I realized I am actually kind of an expert in using the machine. The first time I used it was so long ago that I did not remember if I had also gone through any learning curve.

There are 5 machines in the lobby, and only one staff at the counter selling tickets. However, the machines are often left empty. Most people prefer standing in line to buy their tickets from their fellow human being.

Some people acted confused and were not sure if they could actually purchase tickets at the machine. They wouldn’t want to try it out until they got a confirmation from a staff that they could buy their tickets there. Others simply ignored the machines.

My guess is that standing in line at the box office is such a widely accepted convention at the movies that people just do not even think about other ways. They are ok with waiting a bit longer, it’s part of the experience. Another reason why may be that the machines themselves are not designed to be inviting and welcoming. It says “Touch screen to begin” on the screens, but are they attractive enough for people to want to touch it? 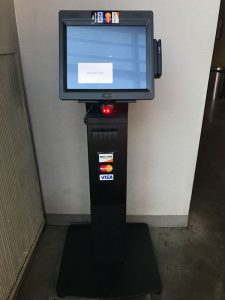 I saw one guy using the machine only to check what movies are on and then joined the long line to purchase ticket at the counter. He was the only one of his kind. Did he miss the human touch, was he trying to get the full movie going experience by standing in line, or did he simply want to pay cash(the most reasonable explaination)? 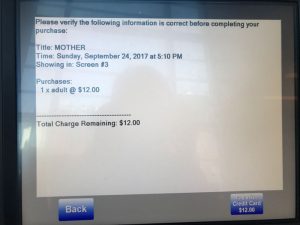 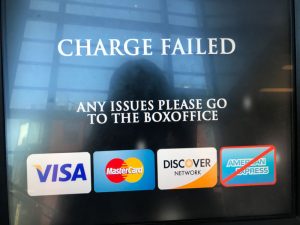 Once you hit the “Credit Card” button on the screen, you have about 10 seconds to open your bag, reach into the dark abyss of all your useful and useless stuff, find your wallet, open your wallet, take out the correct credit card, and then swipe in the perfect direction. Not enough time!

You can argue that people should pause, take out their card before pressing the pay button. According to Don Norman, Author of the bible for human centered design “The Design of Everyday Things”, we tend to blame the users for not being capable to master the machine, when it is actually the design of the machine that is to blame.

Nowadays people operate fast on screens. They just want to quickly press one button after another and finish the ticket buying business. It is not natural for them to hold off from pressing that one button. 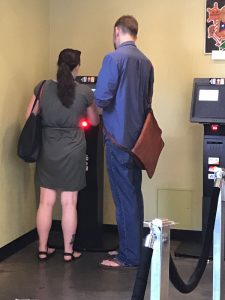 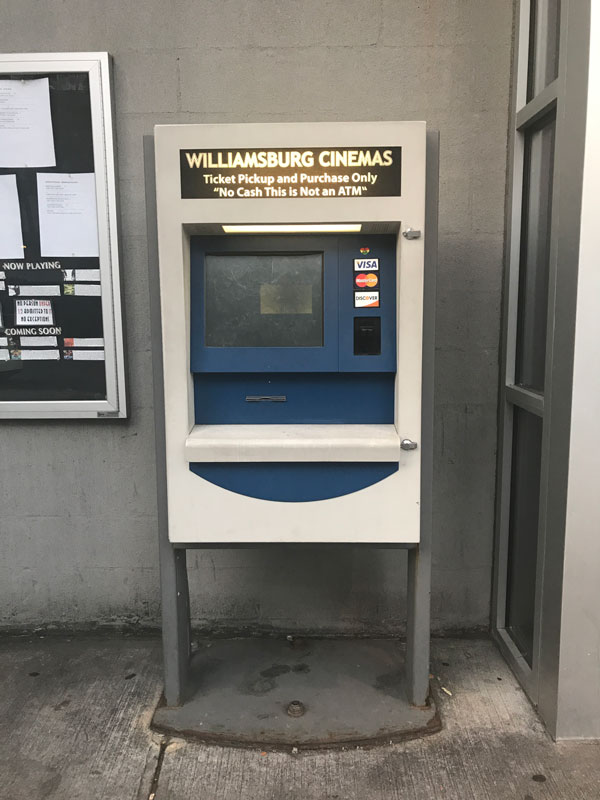 Though I love how it is explaining to us its existence as a ticket machine, I wonder if there is a way to design it differently so it is impossible to mistake it for an ATM.