Posted at 21:23h in Art, Multimedia, Work in Porgress by carrie7l 0 Comments

I’m partnering up with product designer/artist Lifan, to create a multimedia installation for Wavelength, a group exhibit that’s happening 6/25 – 6/29 at Untitled Space. I’m in charge of the video projection and Lifan will work more on the physical installation.

Because of my personal obsession with geometric shapes (and specifically squares and cubes), I started with the idea of projecting some sort of simple animation onto a set of transparent cubes to play off of the contrast between light and shadow, flat and dimensional, etc. etc.. Below you can see some of my initial sketches and inspirations. 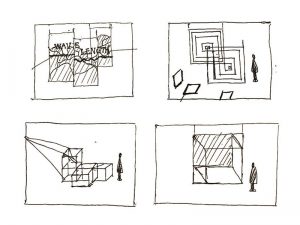 As we moved along the process and really thought about the content that’s to be projected, we got stuck. Cubes are cool, transparent material is cool, geometric animation is also cool. I have nothing against coolness but these are all kind of expected.

In the end we decided not to create some visual effect that might as well be your desktop screensaver, there has to be a story we are telling.

So what is the story?

I went back to my obsession with geometric shapes and tried to dig more into it.

I found a bunch of ancient Greek articles on Geometry as well as 101 videos on Youtube that teaches you the basics of Geometry. (yay internet~)

02 We can say that Geometry is a perfect example of human beings striving to make sense of the physical world, constantly trying to discover general rules or eternal truth out of a dynamic universe.

03 Platonic solids: In three-dimensional space, a Platonic solid is a regular, convex polyhedron. It is constructed by congruent regular polygonal faces with the same number of faces meeting at each vertex. Five solids meet those criteria, and each is named after its number of faces. (Wikipedia)

Plato pairs these five shapes with basic elements in the universe: 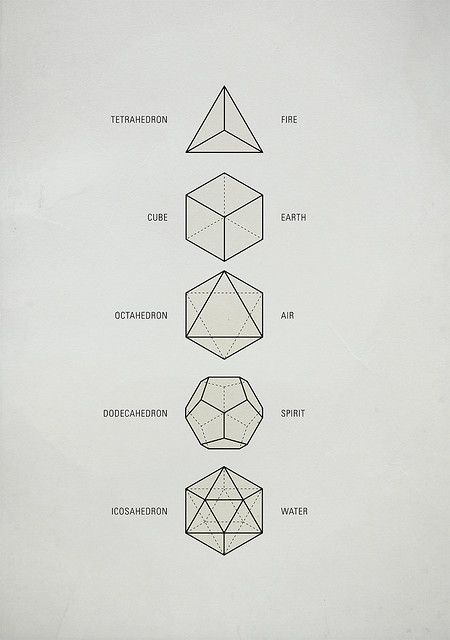 04 Platonic solids are the symbol of Utopian ideals. They are perfect and “highly concentrated”. On a micro scale, they represent the basic elements and building blocks of our world; on a macro scale, they ARE the world (say Cube is use to represent any 3-dimensional space).

But is our world really that orderly and rational?

From these thoughts a new idea emerged: What if we create 5 monuments based on the Platonic solids, and juxtapose them against real landscapes on Google Earth, and generate a pseudo tour video/documentary out of it?

We were excited about this new idea and Lifan recommended me to look at some of Lee Bul‘s artworks. Though we’re not necessarily going for the same aesthetic, her work adds another layer to the story we want to tell. 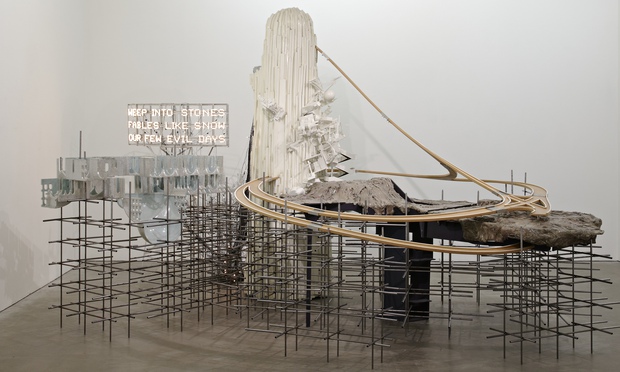