Last Wednesday we went to MoMA as a group. Below are some of the artworks we saw that made the most impressions on me. I picked them because they are all aesthetically pleasing for my taste, and they are all challenging their mediums to some degree. 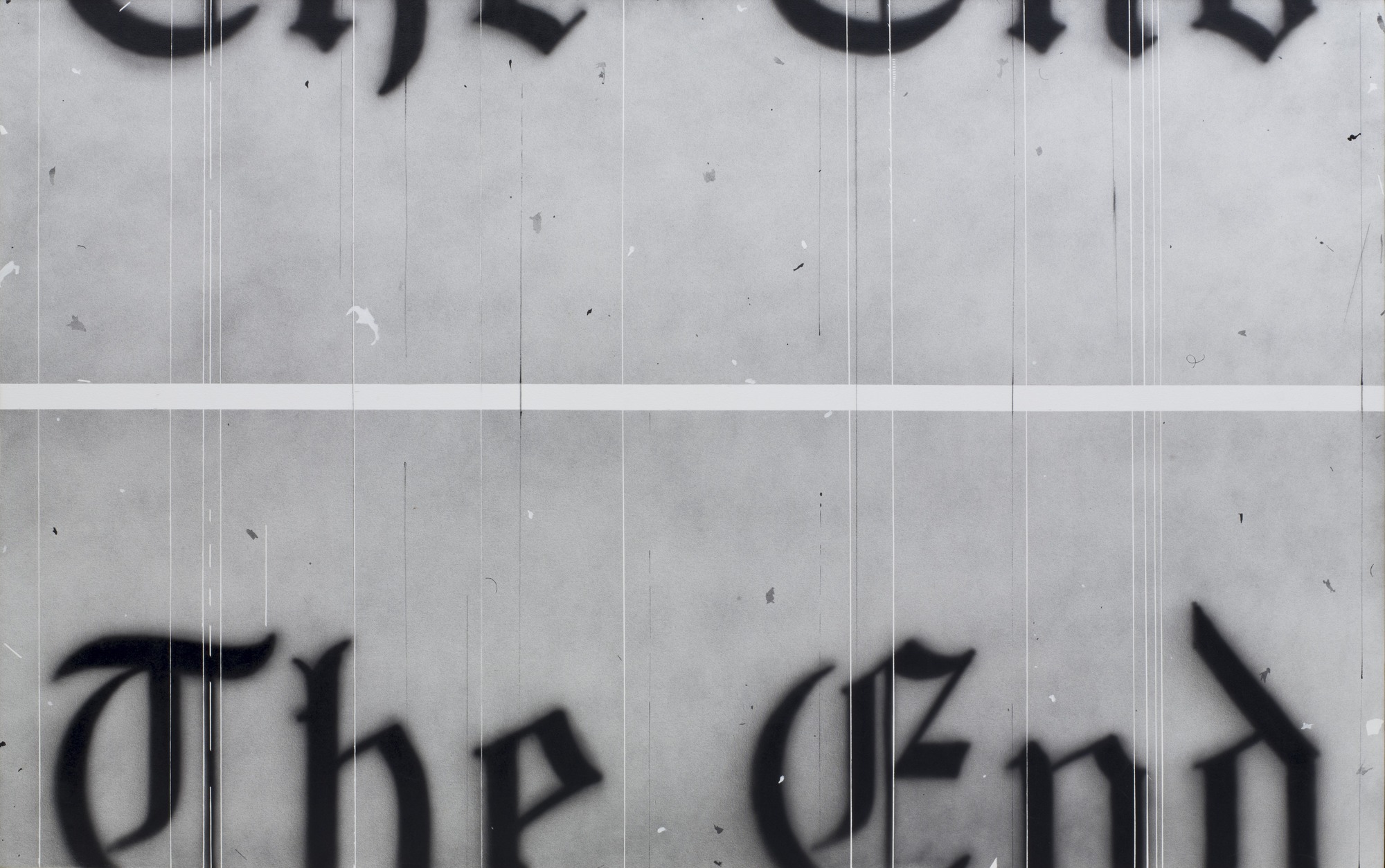 Seeing it for the first time, I could not figure out whether The End was a print or a painting. Its incredibly smooth surface confused me and helped with disguising its medium. This is a painting depicting a film strip, caught in between two frames of the words “the end”. What is present on the canvas is a non-moment, a moment in the film reel that would never be caught by a human eye had it run continuously, an instant of nothingness. The phrase itself adds to the arguably pessimistic vibe of the piece. The painting distills the moment right before “the end”, and within it, time is forever stuck at the very instant before everything comes to an end, there is nowhere to escape. 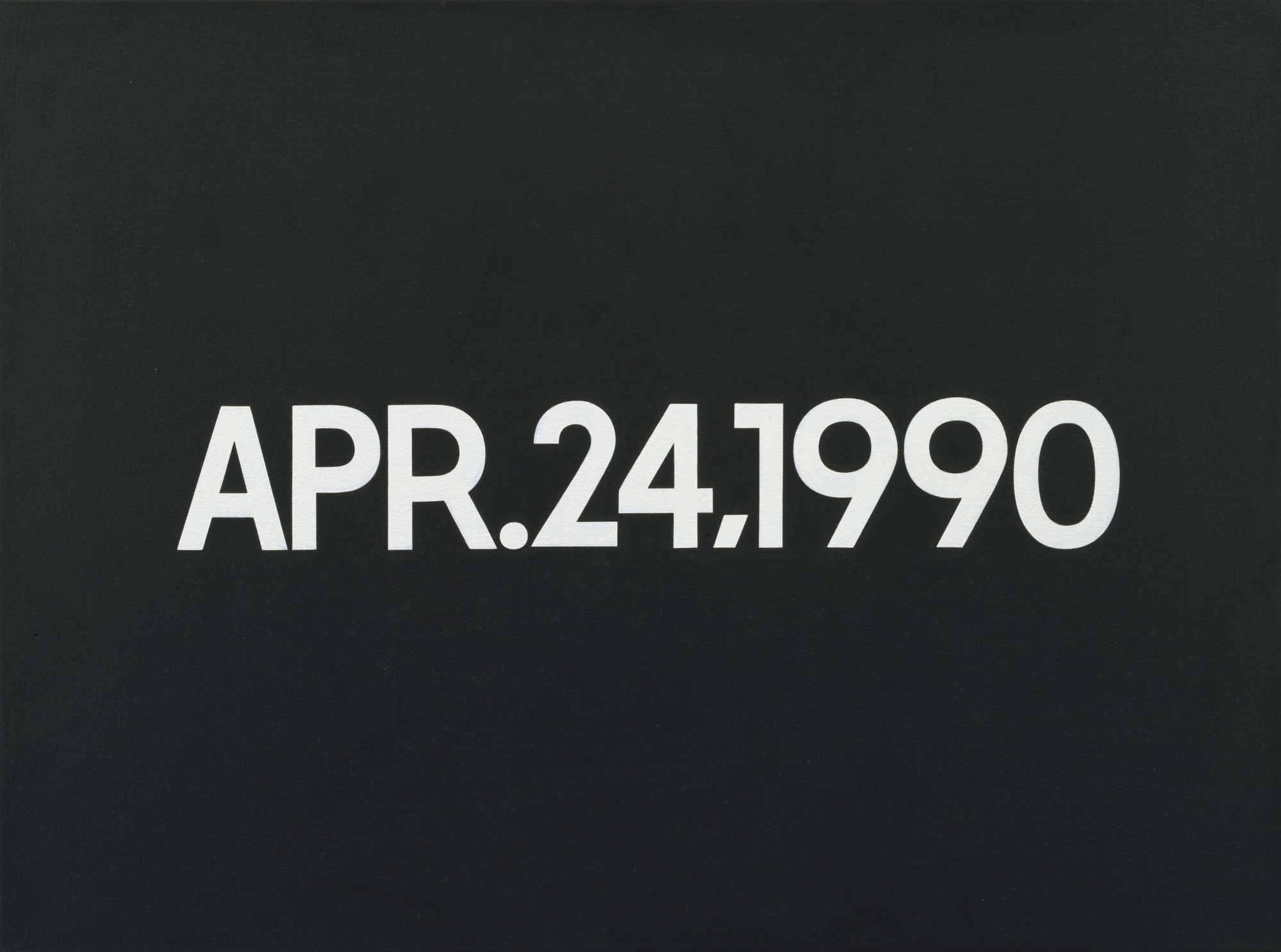 A year or two back I saw about three dozens of Kawara’s paintings from the Today series at Dia:Beacon. For me, seeing a roomful of canvases with dates neatly painted on them was a weirdly unsettling experience. The dates range from the 60s to the 2000s, arranged around the room and probably counting up to the 2000s in  chronological order (I could not remember clearly how they were positioned). At first I was just amazed by the artist’s dedication to the (almost) daily ritual of painting that day’s date onto a canvas with nicely hand crafted letters and numbers. The paintings are of the dates they were painted, they also show through their medium (paints and brushes on a canvas) the actual passage of time when they were being created. After spending more time in the room, the painting started to remind me of death. Each painting in that room was a portion of the artist mortality, a few hours within a day of his life. With the dates silently counting up, I couldn’t help but wonder when the artist reached the end of his life and whether he stopped painting the series right before his departure. Seeing the April 24, 1990 painting on its own at MoMA is a different kind of experience. The painting on its own does not evoke the same fear of death in me, but it does give more significance to the particular date it paints. 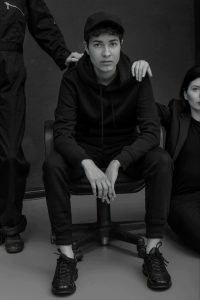 These photos, along with four others from the same series, were exhibited as part of the Being: New Photography show at MoMA. Hung on a wall in a linear fashion, these almost seem like normal group portraits despite their unconventional framing. With only one person being shown in full in each photo, the artist marginalizes the other two people by cropping half of their bodies out. Looking closely, I realize these are the same three people portrayed in each photo. By simple changing their positions and poses, the artist has managed to create a sense of disorientation. Every time the models switch positions, the group dynamics change, so does the hierarchy between the three. 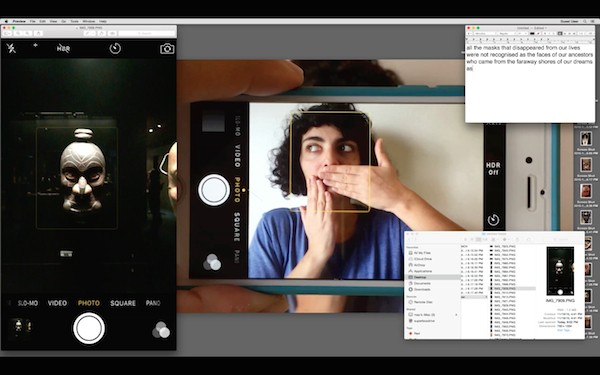 Yazan Khalili
Hiding Our Faces Like a Dancing Wind, 2016

This is a video piece, also part of the Being: New Photography exhibition. According to the artist, “this is a project that works with the facial recognition technologies in smart devices and its historical background in the colonial practices. The work questions the use of technology and its tendency to typecast.” I still do not fully understand the relationship between the woman’s face captured in the camera and the images of ethnographic masks. Are the masks actually matched to her face through a facial recognition app, or is someone just opening up the picture files from the folder on the screen? Despite that, I like how this piece plays with different digital mediums on a computer’s desktop. In this fully digital age, there is something raw and honest about literally showing a recording of a desktop and presenting it as the artwork. Though there is a fair amount of computer processing going on in the background, we as citizens of the highly saturated digital world have the capability to appreciate a screen recording as something authentic and unedited, which is fascinating if you think about it. 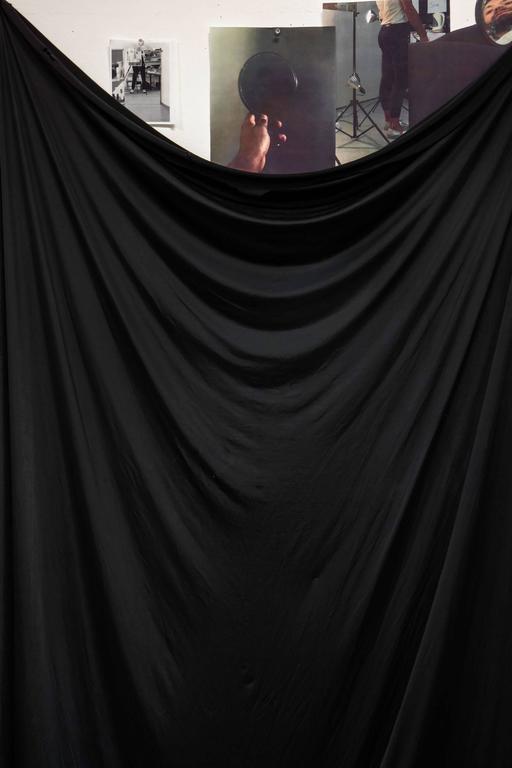 As I was walking through the photography show, A Sitting for Matthew caught my eye with its bold composition. A black drape covers up more than two-thirds of the photograph. Above the drape, a part of a photo studio is revealed, but it is difficult to figure out the spatial relationships between present elements. There is a face reflected in a mirror, a photograph of a hand holding a mirror, another photograph of what seems to be the studio, both seemingly pinned onto the wall, and someone’s legs next to a tripod’s legs. What is being covered and what exactly is revealed? What is the image and what is it representing? Where is our gaze directed? Are we looking or are we being looked at?